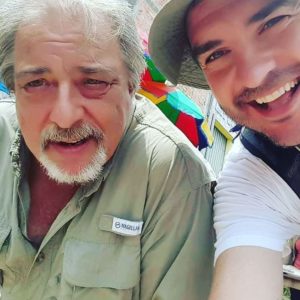 Hello my name is James Michael McCoy and I am a filmmaker from Texas. For the past 3 years I have been making a documentary called More Joy Less Pain. It’s a film about a man named Peter Gorman, an adventurer and writer who has been traveling to Peru for the past 35 years.

I’ve followed Peter as he has navigated the two worlds in which lives, a life in Peru and a life in Texas with his family. Traveling with Peter to the Amazon jungle was a childhood dream come true. Meeting the indigenous people called the Matses was life changing and seeing the phyllomedusa bicolor tree frog was an otherworldly experience.

Making this documentary has changed my life, but the process has also been the hardest thing I’ve ever done. If I’ve learned anything in making this film, is that it’s important to have a team behind you, and that I cannot make films by myself. I have spent every dime I’ve made the last three years on this film, without any grants or private investors.

I shot most of the film by myself, a crew of one, I went to the Amazon armed with only a cellphone and a selfie stick. And I wasn’t totally convinced that this was going to be a good idea until I started looking at the footage when I got back to Texas. Over the course of 3 years I took 3 trips with Peter to Peru, filming in Iquitos and the jungle 3 times, and taking one trip to Cuzco and the ancient city of Machu Picchu to do some interviews. In between those trips I spent dozens and dozens of hours filming at Peter’s home in Texas.

All together I shot over 400 hours of footage, which was eventually cut down to an hour forty-five minute film. My editor Geoff McGee coming on board is what got this film made. Geoff and I worked on editing this film every Monday night for a year and a half before we got to our first rough cut.

The film has had various screenings in LA and Texas. Check out the EVENTS & SCREENINGS page for a screening near you.